Listening to the silence

Growing up as the youngest of three, opportunities to talk were few and far between.  Each one had to be seized upon in case it would be a year before another would come again.  Silence was my chance to speak.

Whatever the truth of my memory, the impact was that silence became an entity that I needed to fill; if I didn’t, and it continued, I would become increasingly uncomfortable.  And so I filled them.  I would jump into the silence with whatever opinion, facts or half-baked humour I could muster.  It wasn’t always the best idea.

Filling the silence risks not hearing the very thing that needs to be heard.  Increasingly I’ve realised that isn’t me.

END_OF_DOCUMENT_TOKEN_TO_BE_REPLACED 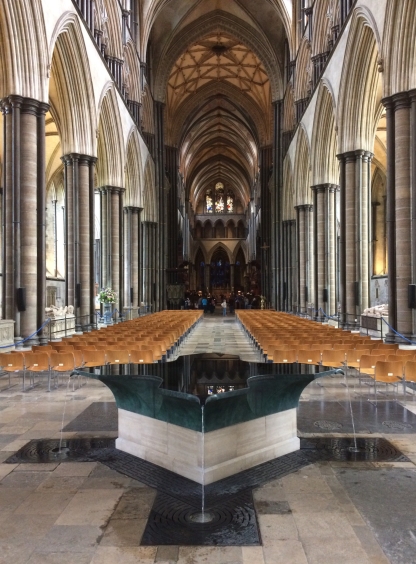 The Font in Salisbury Cathedral

I am now, officially and undeniably (even to myself) an Ordinand.  This week I have begin my training at Sarum College in Salisbury, a place which echoes from my past and which will be embedded in my future, for the next 3 years at least.  Although it is largely a non-residential course it has started with a weeklong Summer School: a chance to build community and get used to the fact that I really am an Ordinand.

Part of the week’s programme has included a mini-silent retreat: from Midday Prayer to Evening Prayer we have been silent.  Having been on a silent retreat before my BAP I was looking forward to this part of the week with eager anticipation.  And as I did during my pre-BAP retreat I gave control of my fingers to God and let Him reveal to me what might be on His heart and to help me articulate what was on mine.

What you will read is the result of the writing.  Normally I type away on an computer with a large screen but this time I used a phone, with interesting results: I could only see a limited amount of what I had typed and only saw the full picture when I read it on my iPad later.  It isn’t polished but it is, with a few spelling corrections, what was the silence revealed to me as I sat in Salisbury Cathedral on the afternoon of 23rd August 2017. END_OF_DOCUMENT_TOKEN_TO_BE_REPLACED

Warning: this post contains plot details and spoilers from the film Silence by Martin Scorsese.

Martin Scorsese is not one afraid to ask challenging questions about the nature of man and faith, questions that some find simply the mention of a step too far, even heretical. Faith is something that has been a subject of exploration in his life and films. Having once sought to become a priest he famously adapted and filmed Nikos Kazantzakis’ novel The Last Temptation of Christ, exploring the idea that Jesus may have struggled with his contrasting human and divine nature.

In his latest movie Silence he has taken more challenging areas to explore by taking Shusako Endo’s novel about 2 Jesuit priests who travel to 17th Century Japan in search of their former mentor who, according to rumours, had renounced his faith. At that time Christians in Japan were suffering under a brutal regime seeking to wipe out the faith. They were forced to renounce their faith, an act known as apostasy, by stepping on an image of Christ known as a fumie. Those that refused to apostatise were tortured, often to a slow and excruciating death.

The title alludes to Gods seeming silence or absence whilst people suffer for their belief in Him, and as the priests watch the persecution unforced around them their faith is severely tested. Whilst believers’ faith gives them strength, the priests struggle to maintain their own faith as the silence breeds doubts.

The film illustrates some of the challenges the persecuted church went through then, and still does today. One of those challenges is the decision whether to profess and practice a faith in public and risk the consequences or to hide their faith away, even publicly renounce or denounce it, and consciously act against the God they privately believe in.

END_OF_DOCUMENT_TOKEN_TO_BE_REPLACED

If I chose to hide you away, it is for a reason.
I have brought you to this place. Drink in the silence. Seek solitude.
Listen to the silence.
It will teach you. It will build strength.

It is little to be found elsewhere.
Silence will speak more to you in a day than the world of voices can teach you in a lifetime.

Find silence. Find solitude, and having discovered her riches, bind her to your heart.
Frances J. Roberts

Via The Northumbria Community