The stoles I designed for my ordination that were finessed with, and painted, by Yvonne Bell

My Ordination Training is coming to its end.  I was due to be ordained in Wells Cathedral at the end of June 2020, but due to the Coronavirus pandemic the ordination has been postponed.  It is currently scheduled for 27th September 2020.

One thing that goes with being ordained is wearing stoles – these are akin to scarfs that people wear during services as an indication that they are ordained.  It is customary to have different stoles for the different colours and times of the Church calendar: Ordinary Time stoles are green; Advent and Lent stoles are purple; Pentecost and Saints’ Day stoles are red; and stoles for Christmas, Easter, major feast days, weddings and funerals are white or gold.

Theological Colleges often have Vestments Fairs, where artists and suppliers show off their work to those who will be needing to wear them once ordained.  At once such occasion at Sarum College, where I have been training, I came across the work of Yvonne Bell (her website contains lots of examples of her work).  As much as I loved many of the embroidered stoles brought by other artists, I became I became transfixed by the Yvonne’s paintings.

Whilst it is possible to buy stoles which have been designed by the artists that make them, it has become more and more common for those being ordained to design their own.  I took the latter approach as it gave me the opportunity to have stoles which matched and communicated my sense of calling, as well as my own tastes.  I already had a design for 1 stole having drawn one during a break at work 5 years ago.  So, after deciding to have a set of stoles in one particular style (i.e. Yvonne Bell’s) I set to work designing three more.  I then worked with Yvonne to finesse the designs before she painted them on to silk. My second version of the design for the Green Stole, switching the sides of the Testaments and adding the all-important (to me) Parable of the Good Samaritan

This is the stole I designed as my mind drifted off during a break at work.  At that time I had been been rejected and not recommended for training at a Bishops’ Advisory Panel (BAP), and was wondering whether I would return for a second assessment to see if God was indeed calling on me to be ordained.

The design flowed out of my subconsciousness.  It became a storytelling stole, one that had moments from the Old Testament and New Testament.  They were framed by the water cycle which linked my love of landscapes with the Bible.  The ‘before’ pictures are annotated with the stories I was trying to depict – the most important one for me being the Parable of the Good Samaritan, a story which had lodged in my brain and spoken to me whilst growing up.  I knew about Christmas and Easter but their significance didn’t become real to me until after I came to faith; where as the Good Samaritan became a constant companion that influenced and shaped my personality.  I added the remaining elements to give a visual overview of the Bible – one includes my namesake but I’ll leave you to pour over the annotations and the final design to see what you can identify!

On the stole it was important to me that the whole of the Trinity was represented.  Jesus is easy to find, God reasonably easy too (I hope!) but as for the Holy Spirit?  In my initial design I had drawn the dove sent out from the Ark.  With the Holy Spirit often represented as a dove I decided to have one dove represent both and fly between the Old and New Testaments.  You won’t find it on the front though.  Stoles tend to have a cross on part that goes across the back of the person’s neck, with Jesus’s Cross represented on the front I decided to have the Holy Spirit represented on the back instead, thereby uniting the two Testaments.  As a sign of my love of the Celtic Christian Tradition, and my links with the Iona Community, I asked Yvonne to include the Celtic Trinity symbol with the Holy Spirit dove – thereby also including God the Father and God the Son on the back. 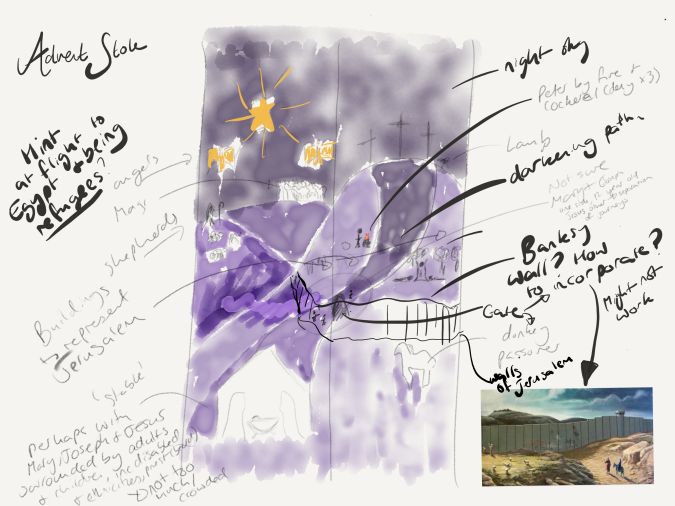 My first version of the design for the Purple Stole

This too is a storytelling stole, one on which I wanted to capture some of the tension between the joy within Advent’s anticipation of Jesus’ birth and Lent’s sorrowful anticipation of His death.

The left-hand side is Advent, with Jesus’ birth, the shepherds on the hill, the Magi travelling in the distance and the angels singing in sky.  From the stable there is a path that leads directly to the Cross on the Lent-side.  As you follow the path you pass the donkey waiting to be ridden by Jesus, the gates of Jerusalem, the Cockerel crowing after Peter denies Christ three times, before a sacrificial lamb stands next to the the three crosses on the hill.  I later added a crowd of onlookers to the scene that showed the full range of emotions present in the Bible: celebration, anger, wonder and sorrow.  And importantly, as another sign of how important inclusivity is to me and my calling, I included people of all ages, someone in a wheel chair and another using a walking stick – this is a theme I picked up in my Red Stole.

For the back of the neck I asked for a cross of nails to be surrounded by a crown of thorns. 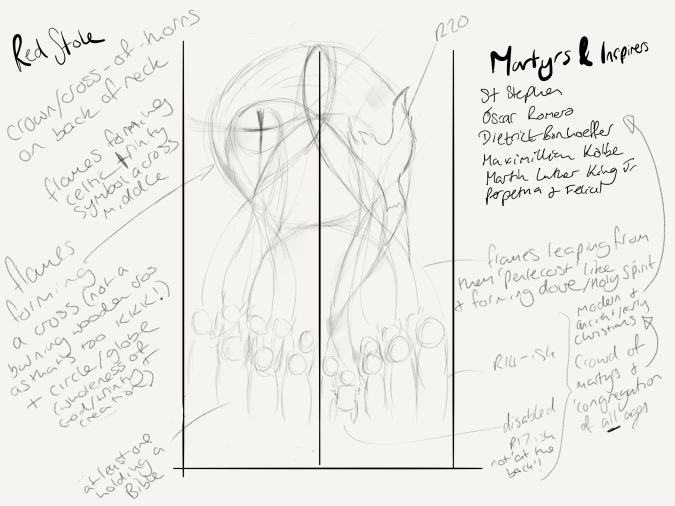 My first version of the design for the Red Stole

For my stole to be worn at Pentecost and on Saints’ days, I took inspiration from a number of designs that Yvonne Bell had previously made.  For my design I had the flames of Pentecost, representing the gift of the Holy Spirit to us all, rise from a diverse crowd of people.  As with my Purple Stole, the crowd included people of all ages, someone in a wheel chair and another using a a walking stick to symbolise that everyone is included in the story, and that everyone is loved by God.  And one person holds a Bible to represent those who have died for their faith.

As the flames rise up they form the Celtic symbol for the Trinity, in part because at Pentecost we celebrate the completeness of our inclusion into the wholeness of God when the gift of the Holy Spirit, promised by Jesus, was given to humanity.  Within the symbol are deliberate references to the Holy Spirit (the dove) and Jesus (the Cross), with God in my mind represented by the encompassing circle.

For the back of the next I asked for a cross in the sale of the stained glass Yvonne Bell often paints.

The neck of the Red Stole with a ‘stained glass’ cross

The White Stole is the most personal to me, as it represents a lot of who I am and what I feel God is calling me to do.

I am the son of a refugee.  Towards the end of the second World War, my Grandma, Granddad, Father and Uncle (both of whom were very young) escaped the concentration camps in the Ukraine.  They travelled across Europe on foot before being picked up at the end of the war and offered sanctuary in the UK.  Connected with this, when a group of artists led by Ursula Brooke were working on a tapestry for St James The Great Church in South Stoke (a village on the southern edge of Bath) they asked me to stand in as the model for St James.  Their tapestry (see below) was inspired by the refugees crossing the Mediterranean Sea, and shows Jesus calming the waters whilst St James reaches out to physically save a woman caught in the stormy sea.  This formed the base inspiration for the design and several elements can be seen in both.  An added significance of the link with St James Church is that they are part of my sending Benefice, i.e. the churches I was part of before training for ordination. 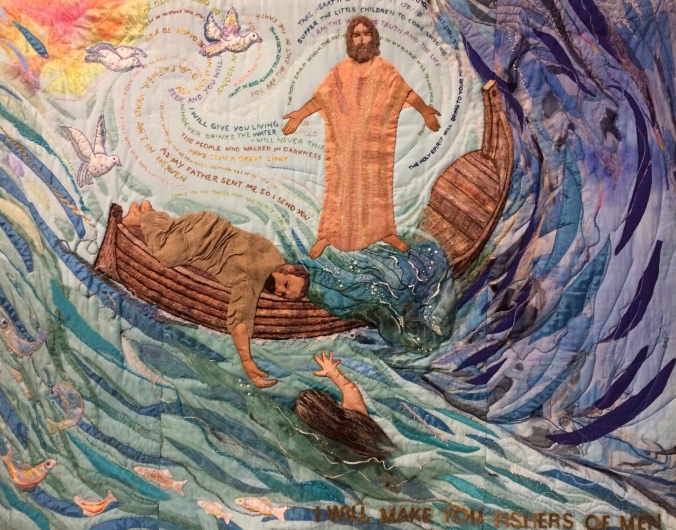 A tapestry within St James the Great Church in South Stoke, near Bath, England.

For my design I had the boat be formed from God’s hands, which in turn form into Jesus and the Holy Spirit, thus representing the Trinity.  During this transformation, God’s ‘arms’ form the rainbow signifying God’s loving covenant that filled the sky after the floods diminished and the Ark settled once more on the ground. An unintentional but welcomed result of the transformation is that it reflects the design of the Scissor Arch within Wells Cathedral, in front of which I will hopefully be ordained – this stole will be placed upon me once I am.

The Scissor Arch within Wells Cathedral

In the boat there are a diverse range of ethnicities and ages, again representing the importance of inclusivity to me.  The two sides of the boat are facing each other in a sign or coming together in both reconciliation and shared experiences. One of the refugees safely in God’s embrace is holding the lost sheep, representing the Parable of the same name (Luke 15:1-7).  Some in the boat are looking sorrowfully at the pollution in the sea (subtly shown by a couple of plastic bottles) and a struggling dolphin and turtle – a representation of the importance of eco-justice to me and God.  And, in a direct reference to the inspiration of my family and my refugee heritage, the sail of the boat is in the colours of the Ukrainian flag.  Finally, taking inspiration from the Lampedusa Crosses, the cross on the back is a simple wooden cross, made (in my mind) out of the wreckage of a refugee boat.

The neck of the White Stole with a cross made from the wood of a shipwrecked refugee boat.

Poignantly, this and the other stoles arrived in the post half an hour after I heard the sad news that my Grandma has passed away.  Sadly she never got to see the stole, or me be ordained, but she will forever be with me when I wear it.

If you are looking to find out more about stoles and other vestments go to my page “What to wear and where to buy it” to find out more.  And if you know of artists or other suppliers who would be good to add please contact me.

One thought on “My Ordination Stoles”