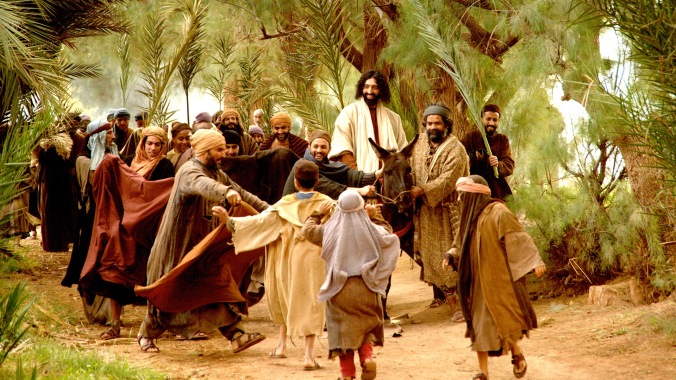 Have you ever noticed how Jesus often manages to do the expected and the unexpected at the same time?

Those on the look out for the messiah 2,000 years ago would have expected Him to have arrived in Jerusalem on a donkey, yet when he did few expected it.

Jesus was what went for a celebrity in His day.  There was no Twitter, Facebook, Instagram, Snapchat or Periscope to spread a message or get your fix of news and entertainment.  Jesus’s social media was old-school word-of-mouth.  Those that saw, heard or were healed by Jesus told their friends and family about it, who told their friends and family, who told… you get it.

So word got out that Jesus was coming into Jerusalem.  Most people wouldn’t have known what Jesus looked like but it wouldn’t have taken them long to have figured it out: a man upon a donkey encircled and led by an entourage would have drawn people’s curiosity at the very least.

Here He was, a saviour and a threat, being celebrated, cheered and sneered, a celebrity being welcomed.

I produced the video above for the start of the service as a contrast and comparison to a video of Jesus’s Triumphant Entry into Jerusalem during Passover.

We might think we know the actors, models and musicians we saw at the beginning of the service but we generally don’t know what’s really going on in their lives.  When we see actors on the red carpet or the musicians rocking out on the stage we only see what’s on the surface.  We don’t see what’s going on in their mind or their heart.  It was similar for the crowd watching Jesus.

The crowd in Jerusalem would have seen a person seemingly at ease with being the centre of attention but they wouldn’t have seen the full picture of the person before them.  They wouldn’t have seen or known what was on Jesus’s mind.   He might have been smiling on the outside but on the inside He was wrestling with the mission God had given Him.  The crowd couldn’t see what Jesus could see ahead: the Cross.

The image we see when we look at someone is not the full picture.  Our thoughts, our feelings and much of what we do is often hidden.

People may view you as an ordinary child, a run of the mill office worker, a stereotypical parent or a pensioner with pearls but that isn’t your true identity.  You are a secret agent and a super-hero on a mission from God.  You may not be able to fly or shoot webs, and you may not have any spandex or wear your underpants on the outside, but God considers you to be essential to His grand plan.

The crowd didn’t know what was going on inside of Jesus, nor do we know what’s going on in the minds of each one of us.  We might be smiling on the outside but struggling on the inside.  We might seem to many to be a confident go-getter to your friends but secretly are apprehensive and doubt our abilities.

Just as God had set Jesus a mission so God has set a tailor-made mission inside each one of us.  Jesus knew what He had to do and He knew God would help Him achieve it.  Do you know what your mission is?  Do you know what is God asking you to do?